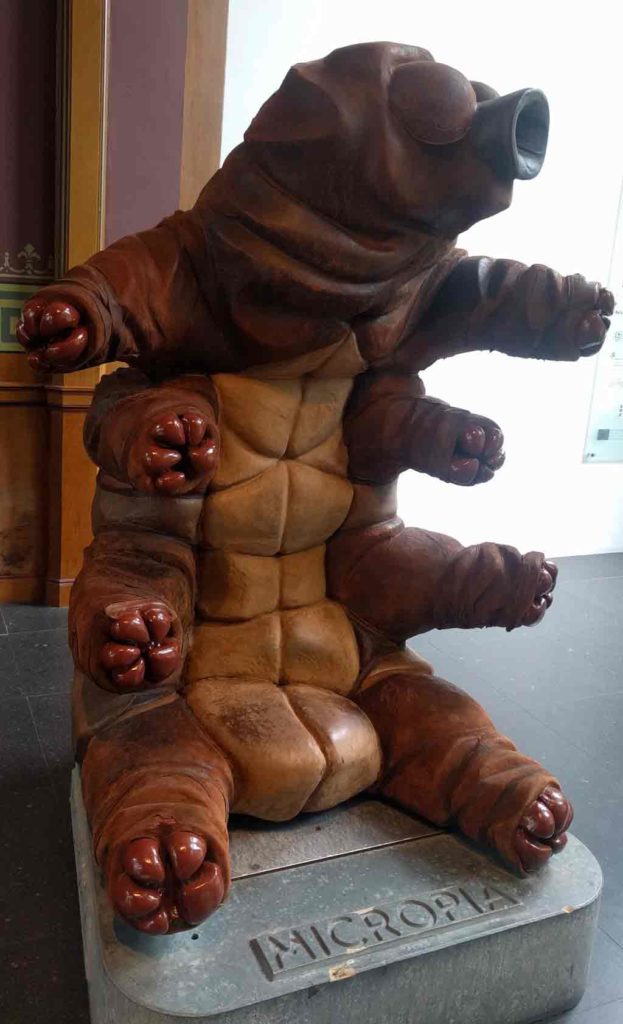 Micropia is an unusual museum in Amsterdam that is all about microbes. It is a science museum about things that are too small to see with the naked eye, which most people barely know about or think about, but are a critical part of their lives. The museum celebrates microbes as things that are not to be feared, so it’s not surprising that the first thing you see when you come in is a giant cuddly statue of a magnified water bear. In an exhibit we learned that water bears are not killed by extreme heat, cold, radiation, water pressure or even the vacuum of space. Rather they go into a suspended animation only to revive when conditions are favorable. 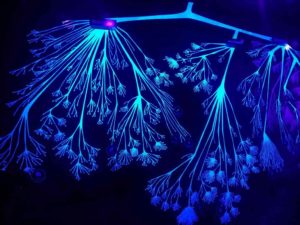 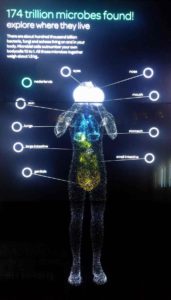 Microbes in the human body

The museum is presenting the latest science of microbiology. One exhibit shows that almost all of the “tree of life” is microbial, that only a small portion of known species are “visible life”. An interactive exhibit showed that I have 174 trillion microbes in me. Using gesture recognition, it allowed me to point to parts of my body, and it gave details of how microbes in each spot affect our health, like the various bacteria in the mouth and the upper and lower intestines which allow us to digest food. 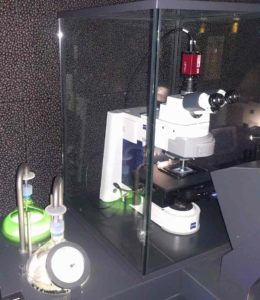 Microscope with an exhibit on cyanobacteria 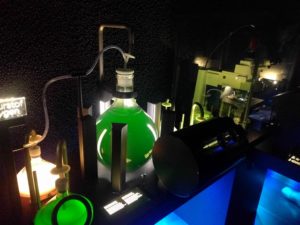 There were lots of exhibits with microscopes, so that visitors could see different types of microbes for themselves. One was about cyanobacteria, which make oxygen through photosynthesis. They are tiny but so numerous they make as much oxygen as all the plants and trees on earth combined. Another showed water fleas (about 1.5 mm long) and the green algae (0.045 to 0.15mm) that they eat. These form the bottom of the food chain in lakes and ponds. 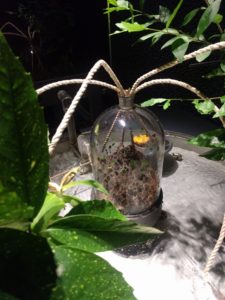 An ant farm. Leaf cutter ants walk across the rope bridges to bring bits of plants to the fungus they are cultivating 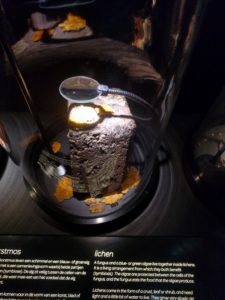 An exhibit showed different types of lichen, which are a symbiotic combination of bacteria and fungi. Another was an active ant farm. Leaf cutter ants harvest bits of leaves that they feed to fungus, which produce gongylidia, a sort of fungal “fruit” that the ants eat. 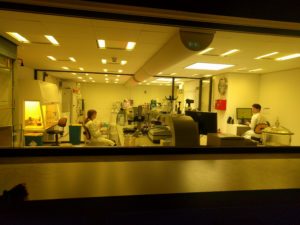 The museum’s lab, behind yellow glass. The lab is where they make the live cultures for the exhibits

The museum’s laboratory was visible behind glass. The museum needs to continuously create cultures for the exhibits with live microbes. The lab is sterile and everything is white, to help see and clean any contaminating messes. It is behind yellow glass, because all of the white would otherwise overwhelm visitors eyes as they look back to the darkened exhibit hall. 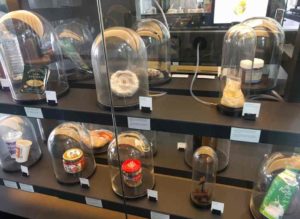 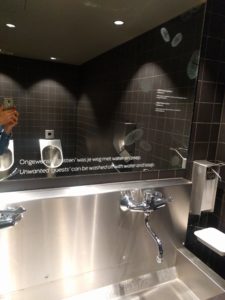 In the museum’s bathroom, a reminder about hand washing and microbiology

Several exhibits concentrated on food and microbiology. One showed all of the foods that are “fermented” by bacteria or flavored with funguses, while another showed how bacteria and fungus make foods spoil over time (there were two-year-old french fries that looked fine and three-week-old strawberries that were mush).

There was even an “exhibit” on the men’s room mirror, reminding visitors that washing our hands with soap is another way we interact with bacteria everyday!