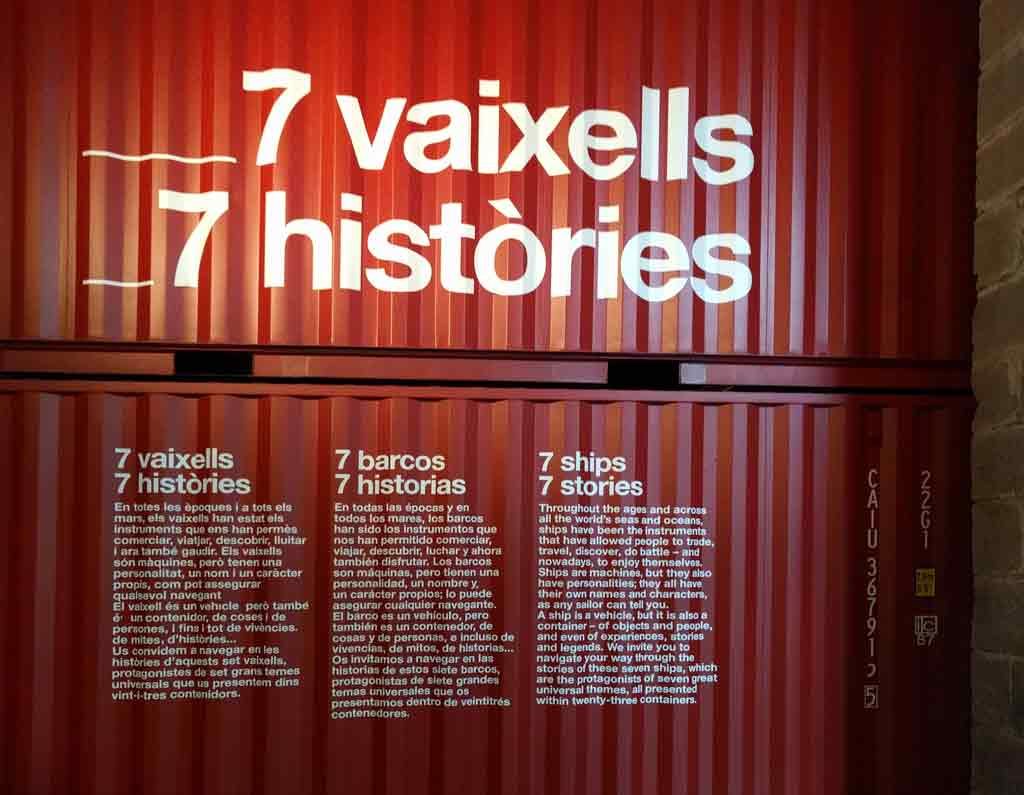 This very smart museum has a great balance of whimsey, social responsibility, historical information and playfulness. This was reflected in the range of excellent exhibits on display when I visited — an exhibit of robotic sea creatures made out of recycled machine parts, a photography show about the dying cultures of village fisherman around the world, a large show of toy boats, and the show I am writing about — 7 Ships, 7 Stories, which tells the history of Maritime Barcelona through 7 model ships.

Each model ship represents a different theme, which is examined further through artifacts, documents, and other model ships. 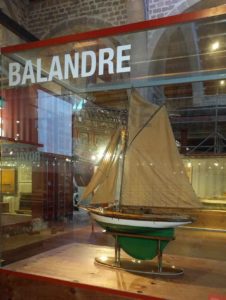 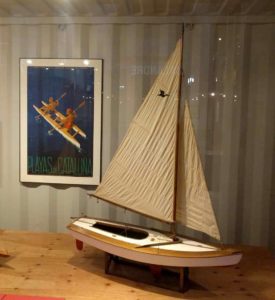 The first model was a “cruising yacht sloop”. This brought on the first theme — leisure boating. For most visitors to the museum this is type of boating they are most likely to personal experience with. 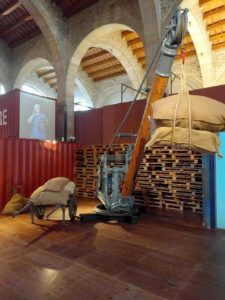 The next model was of a container ship Pilar. This introduced the concept of shipping, and how it has transformed our economy. When I got the this section, I realized that the shipping containers that the exhibit is built out of was not the usual “upcylcing” that we are used to, but related directly to this them in the exhibit. There were also some old winches and cranes for moving freight on the piers, but these were clearly from a different generation from the shipping containers which require huge machinery. 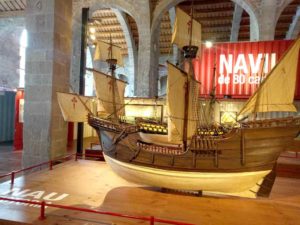 The next section was about exploration by ship. The featured model was the Nao Victoria, Magellan’s ship, the first to circumnavigate the globe. This section also displayed artifacts from more recent explorations of the polar regions. 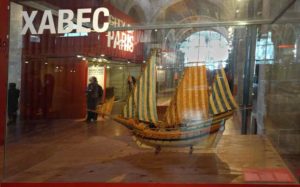 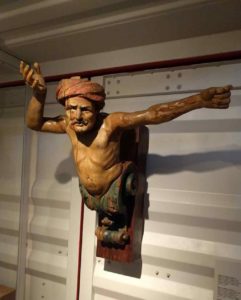 Figurehead of a turk, from the bow of an old boat

The Xabec was the next model of ship. It is a galley ship, with both oars and sails to make it the fastest ship of its time. This style of ship was used by pirates and profiteers as well as by soldiers chasing pirate ships. The displays in this section described the dangers of sea travel at this time, and also mentioned the resurgence of piracy today. The exhibit explained that while pirates plundered for themselves, profiteers would be licensed by a government to attack ships of enemy states, splitting the booty between the profiteer and their sponsoring state. 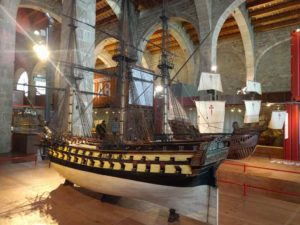 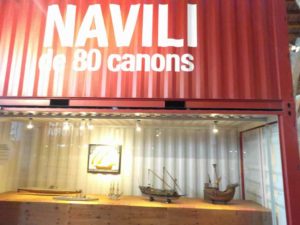 The next model was of an 80 cannon warship. The model itself is from around 1740, and was used by shipbuilders as 3 dimentional plans. 80 Cannon warships were the most powerful weapon of their time, and could be used both to attack other warships as well as to attack harbor cities. There were a number of other battleships in this section of the exhibit. 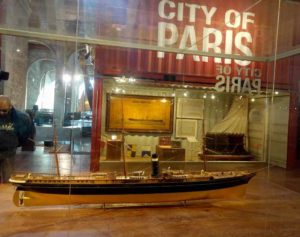 The City of Paris was a 19th century “steamship with frigate rig”. It had both sails and a steam engine, and was symbolic of the transition between wind power and steam power. This introduces us to the modernization of shipping that took place due to the new technologies of steel ships and steam engines, which transformed ships making them much faster and more reliable. 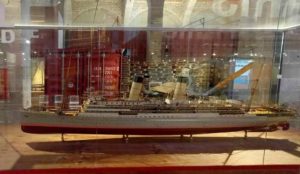 The final model in the exhibit is the Royal Edward. This steam ship started out as a mail ship carrying “fast mail from Marseilles to Alexandria”. It later became a Canadian troop carrier during WWI, when it was sunk. This final section describes the final glory days of ships moving people between continents. As airplanes became an affordable and much quicker alternative during the 20th century, traveling by boat declined and became a luxury.

I liked this exhibit because the model ships pulled me in to these varied stories of maritime history.