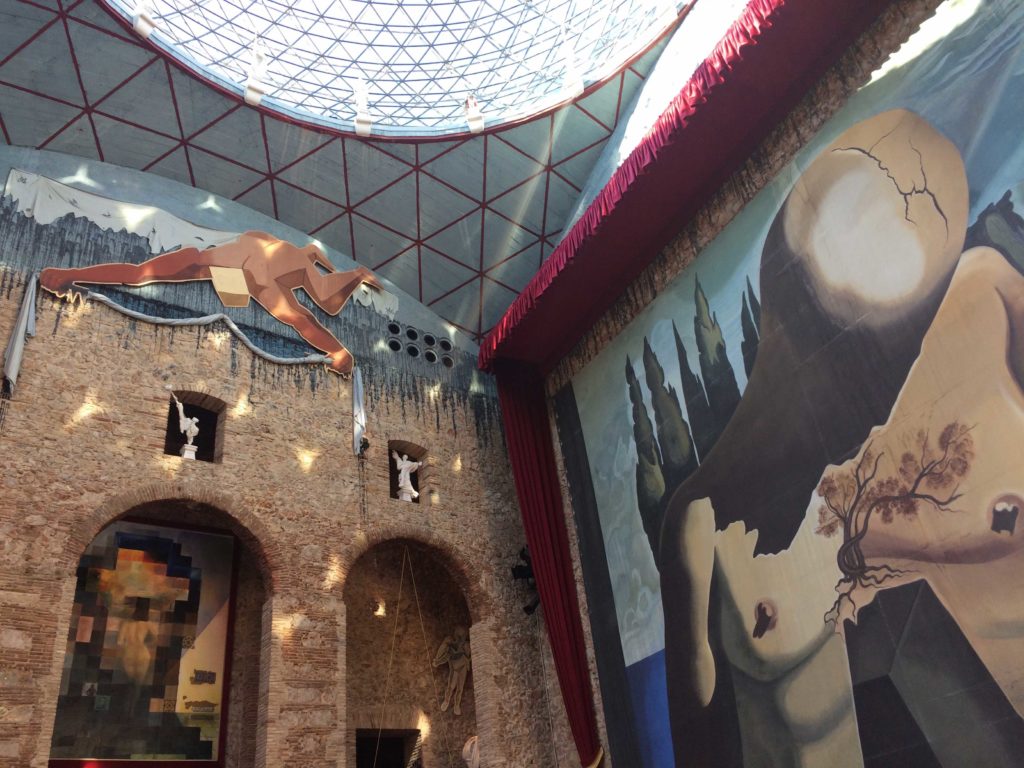 This museum in Figueres, Spain — about 2 hours by train from Barcelona — is the first museum I have visited that was created by an artist. Dali said he intended the museum to be “the largest surrealist object in the world”, and the museum did, in fact, give me the same feeling as the art inside — a mixture of amusement and uncomfortableness.

The museum building started as the theatre of Figueres, the small town where Dali grew up. The theater was bombed during the civil war, and left in ruins for decades until Dali transformed it into a museum. 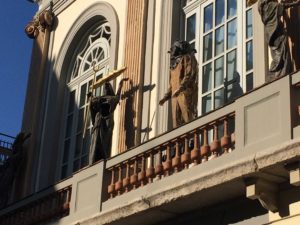 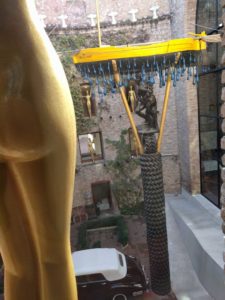 The museum may not contain many of Dali’s masterpiece paintings, but it does contain some truly spectacular environments and objects. The area where the theater’s audience once sat has been transformed into a large open-air court. In the center is a recreation/variation of Dali’s 1939 Mannequin Rotting in a Taxi-Cab, using Dali’s wife Gala’s own antique cadillac with a larger-than life Ernst Fuchs nude as the hood ornament. The car is pulling a bronze column molded from a pile of tires, which supports a fishing boat who’s bottom is covered in golden droplets. This is piece is one of several coin-operated objects in the museum — put a euro into the slot, and it starts raining inside the car onto the manequins representing the driver and the passenger (the driver is protected from the “rain” by a rubber bondage jacket). All this with opera music playing in the background. If this isn’t “over the top” in true Dali style, I don’t know what is.

The former theater stage has been covered by a geodesic dome, and features works incorporating full size replicas of Michelangelo’s sculptures Moses and Slaves. In the center of the “stage” you can see the outline of the top of Dali’s tomb, which you can visit underneath. 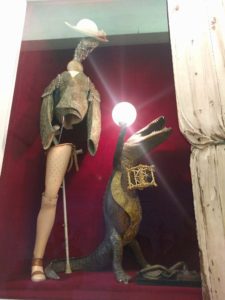 Assemblage with an alligator and prosthetic leg 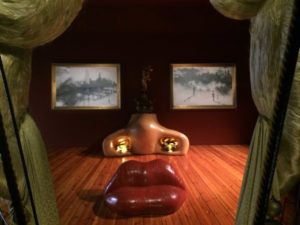 Another installation based on Dali’s painting “Il Volto di Mae West”. As in the painting, Mae West’s face is recreated as a room, with her nose as a fireplace and her lips a couch. A viewing platform encourages visitors to look at the piece from just the correct angle to create the illusion.

While some galleries in the museum feature Dali’s early cubist paintings, and others displayed his sketches and lithographs and some artworks he collected, I was particularly drawn to Dali’s 3D experimentation. This includes hand-painted “stereograms” where he painted two slightly different variations on the same painting, one for each eye. These were presented with 2 angled mirrors to create the illusion of one 3D image when viewed from the correct angle. There is also Holos! Holos! Velázquez! Gabor!, an installation from 1972 which incorporates a holographic projection which shows a cutout infanta from Velázquez’s Las Meninas or some card players, depending on the angle you look at it. Another hologram is a portrait of Alice Cooper, biting the head off a Venus de Milo.

Overall the museum, like the best surrealist art, inspired surprise, awe, laughter and a little bit of confusion and discomfort. Indeed, the very plan of the museum is a disorienting labyrinth with seemingly no way out — hardly the goal of a typical museum architect.