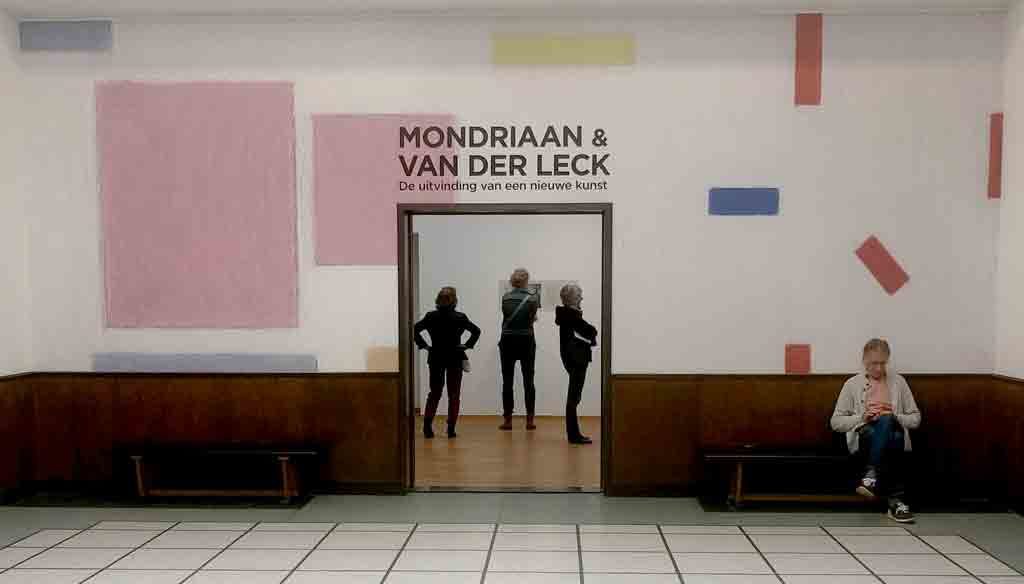 This year is the 100th anniversary of De Stijl in modern art. To celebrate, the Gemeente Museum in The Hague created this exhibit about two painters and their two years of experimenting together that were critical to the birth of this movement. The Gemeente  (or “municipal”) Museum has one of the worlds largest collections of Mondrians and De Stijl artworks, and this show was a delight.

Similar in some ways to the collaboration between Picasso and Braque which, a few years earlier, had lead to the creation of Cubism, the interaction between Mondrian and Van der Leck would push each other artistically and make waves that would permanently change the art world.

In 1916 both of these painters were in their 40’s and were living in the village of Laren, an artist colony outside of Amsterdam. World War I was raging in Europe, and circumstances had forced Mondrian to leave Paris and return to his native Netherlands, which did not participate in the war. Both artists were looking for a “spiritual” style of painting, perhaps as a reaction to the chaos of the times. 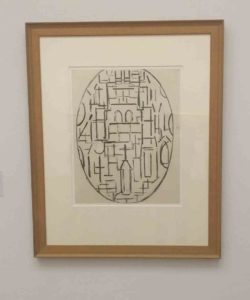 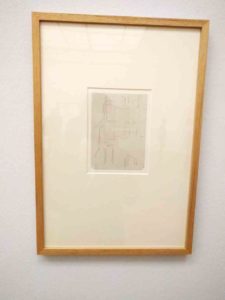 In the beginning  of the exhibit, you can see how both artists are starting from real world compositions which they simplify dramatically. Mondrian takes his sketch Church at Domburg and transforms it into a series of barely recognizable boxes and ovals in his final version. 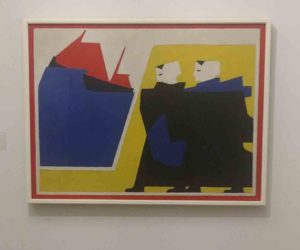 In 1916, Van Der Leck’s The Storm was already working in the signature colors of De Stijl — pure red, blue yellow, black and white. His figures are simplified but are still recognizable. 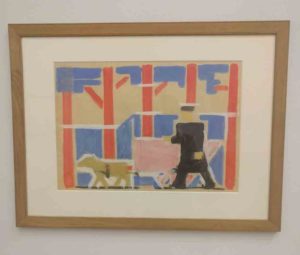 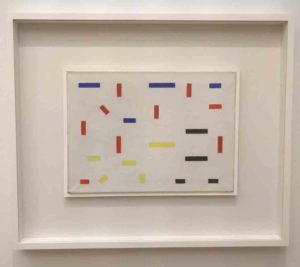 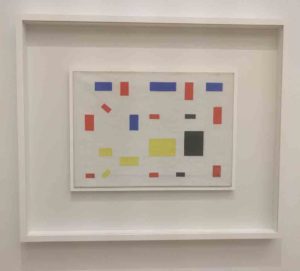 During the years that they were together in Laren, Van der Leck began taking his simple compositions and simplifying them further into a series of red, blue, yellow and black rectangles that can only be decoded by seeing them with the original sketch. 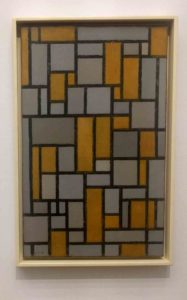 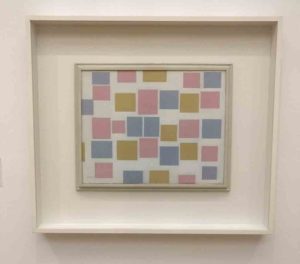 Mondrian was also pushing boundaries, separating his painting entirely from the outside world. He started working with black grid lines, though he is still painted  shades and tints, rather than the pure primary colors of De Stijl.

Eventually the two painters would have a falling out, as Van der Leck was committed to the “open space” in his paintings, while Mondrian was paining tight grids. Van der Leck insisted on subject matter in the outside world, even if it was not evident to viewers, while Mondrian’s subject was his grids. Ven der Leck left the new De Stijl group. And fter the war ended, Mondrian moved back to Paris, and continued to evolve his abstract style. But their years together in Laren were an inflection point in art history, contributing to  a new kind of abstract art.