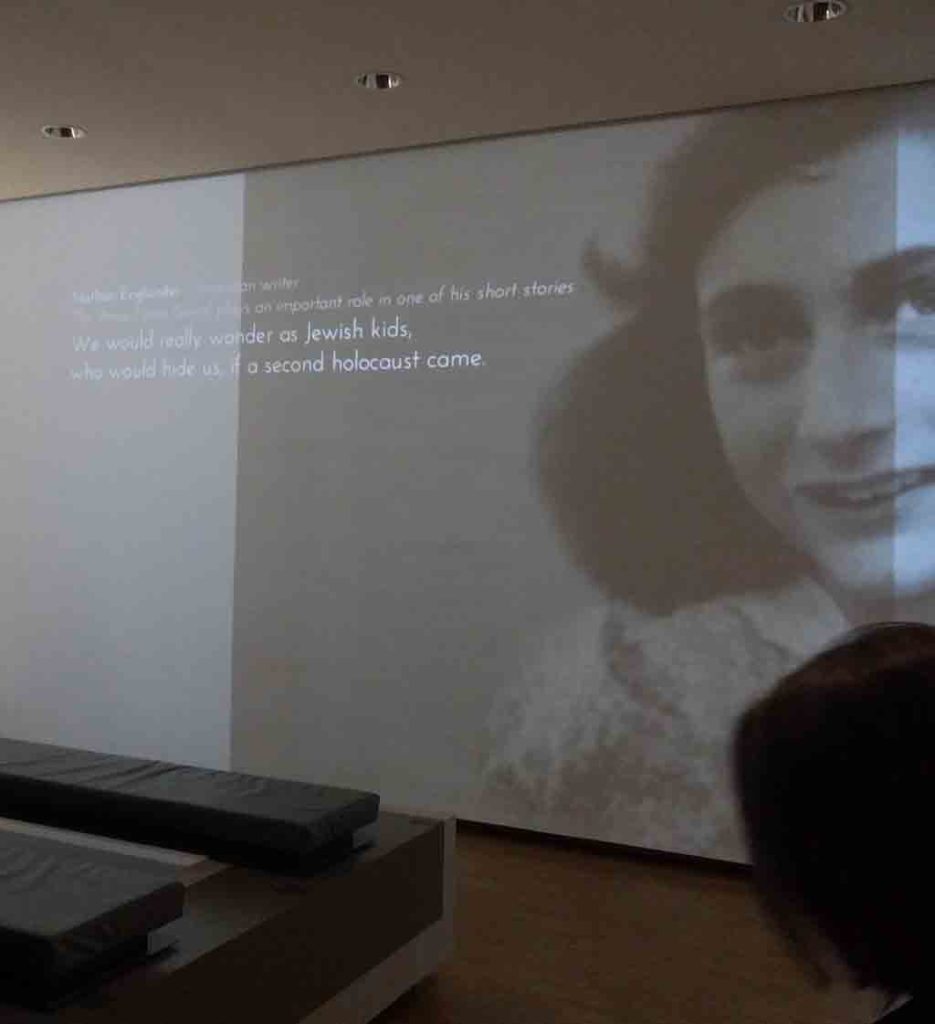 I knew I wanted to go to this museum, so I had been rereading The Diary of Anne Frank. But what, I wondered, would the museum experience be, and how would it add to what I got out of reading the book? After all, we all know the outlines of Anne’s story, how she was a teenager hidden with her family and 4 others in a “secret annex” of a warehouse for two years during World War II, only to be captured and sent to die in a concentration camp. The diary tells of her day to day life in the annex, revealing both her typical teen-age problems (such as fights with her mother, crushes on the boy who is in hiding with them) as well as the unique pressure of her unusual circumstances. The Nazis had cleared out the annex once it was discovered, so when Otto Frank, Anne’s father and the only resident of the annex to survive, the family’s possessions we mostly gone. I knew it would be crowded because the annex is very small, and the Anne Frank House is one of the most popular places to visit in Amsterdam — so what is it, I wondered, that I would get out of my visit? As it turned out, I was not disappointed, and it was a moving experience.

The visit takes place in 3 parts — the first part is in several rooms of the warehouse, then you go into the annex, and finally you are in a new building with additional exhibits. In the warehouse there panels explaining the situation for Jews in Amsterdam, and the Frank family in particular during the war. 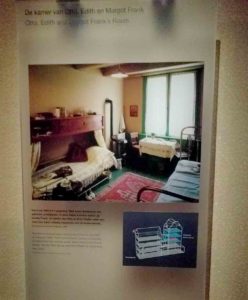 Recreation of Otto, Edith and Margot’s room in the Annex 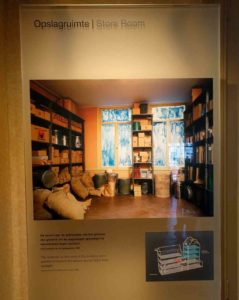 Recreation of a store room in the warehouse

There are hardly any furnishings in the rooms, they were either removed by the Nazis or cleared out to make room for the many visitors. However, while the house was closed for renovations, some of the rooms were restaged to show how they looked originally, and these are mounted so the visitor can get an idea of what the room he is in was like during Anne’s time here.

Jewish Star, like the ones the Franks were required to wear before they went into hiding 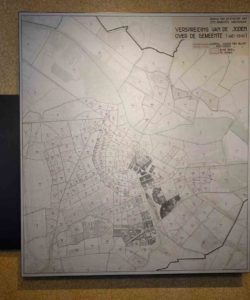 The first part of the visit, in the rooms of the former warehouse, gave some context to Anne’s story, and included some artifacts that were not directly related to Anne personally. There is a map, created for the Germans at the beginning of the occupation, showing which houses Jews lived in. Prior to the war, the Dutch government kept records on every citizen’s religion. These records allowed the Germans to find and kill 75% of the Jews in the Netherlands, a much larger percentage than in France or Belgium. 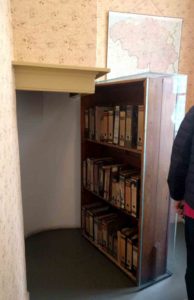 Entry into the secret annex from behind a bookcase

But while the background information set the stage, for me it was the immediacy of being in the annex that was so moving, which brought tears to my eyes, in a way that reading the diary didn’t. Going through the bookcase, standing in each of the rooms somehow made Anne’s stories come to life for me. Seeing the movie-star clippings that Anne had mounted on her walls, looking through the attic window that she and Peter would gaze out of made her story, and its heart-braking ending seem all the more real. 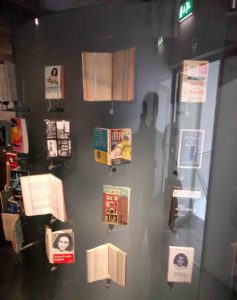 Copies of Anne’s Diaries as published around the world.

Next was a display about the diary itself, explaining how Anne had prepared the diary to possibly be published after the war. She knew she wanted to become a writer, and she had heard on a British radio broadcast that the British were planning to collect first person accounts. Her father, returning from the camps was given the diaries (which Anne had not let him read during her lifetime) and found a pulbisher for them. The book became knows around the world, and the book has been translated into over 60 languages.

At the end of the visit, there was a film, with recorded reactions of visitors to the house, including some celebrities like Whoopi Goldberg, authors, and people who had known Anne. This helped me think about my reaction, as well as encouraging me to use a kiosk to record my thoughts.

I was moved in a unique way by this museum that documents a dark time in history, a teenager’s life, and her book.