This exhibit connects two great ceramic traditions — that of the town of Jingdezhen in China, with Delft in the Netherlands. It explains how the Dutch in the 17th century imported Chinese porcelain at great expense, and then started creating their own ceramics primarily in Delft, some imitating Chinese designs, others with Dutch scenes. 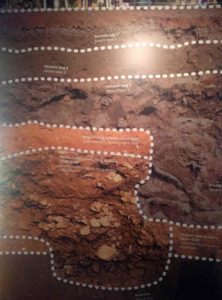 A cross section of an archeological dig, highlighting where the pottery was found. 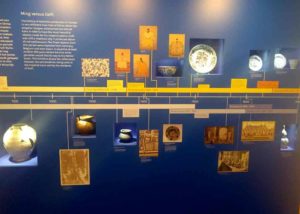 Timeline of Ming and Delft pottery.

The exhibit starts out showing how the pottery workshops of Jingdezhen created vases, tea sets, and other ceramics exclusively for the emperor. The town was gated and entrance was forbidden to all except those who had business there, to keep the potter’s techniques secret. Archeologists have found lots of information about the ceramics industry in this town, which stretch back 1700 years, and it has continued to be a place where ceramics are manufactured to this day. The exhibit included video of contemporary artisans finishing and painting pottery using similar techniques as were used in the Ming dynasty. 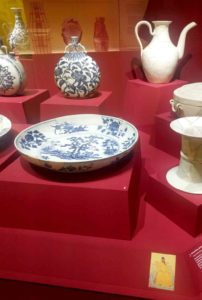 Porcelain created for Emperor Yongle. These pieces were rejected and discarded. 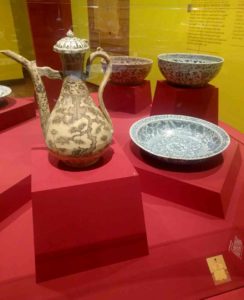 Ming teapot and bowl (rejected as not suitable for the Emperor). From the time of Emperor Hongwu, first of the Ming emperors.

The treasures of this exhibit are in the second gallery. In the 1980’s archeologists in Jingdezhen uncovered  troves of broken, discarded porcelain created during the start of the Ming dynasty in the 12th and 13th Century, that had been rejected as unsuitable for the emperor. These pieces have been restored, and this exhibit is the first time they have been exhibited outside of Asia. Each case in the exhibit is labeled with the portrait of one of four Ming Dynasty emperors, which match large panels on the wall describing that emperor’s reign. 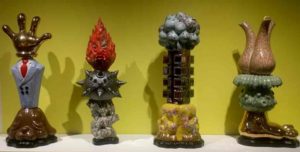 Pottery created by Hans van Bentem during his residency in Jingdezhen

To celebrate the connection between the two cities, the exhibit featured some delftware from the museum’s permanent collection. It also featured ceramic works by six contemporary artists and designers from China and the Netherlands. The Chinese artists spent a few weeks in residence in Delft, while the Dutch artists spent a few weeks in Jingdezhen. Each artist incorporated the traditions of their host country into contemporary ceramic artwork. Hans van Bentem created humorous pieces with interchangeable top, middle and bottom pieces, similar to a child’s mix-and-match flip book. Maaike Roozenburg created digital 3D scans and 3D prints of Delft porcelain, and used these as a starting point to make new designs using traditional Chinese techniques. 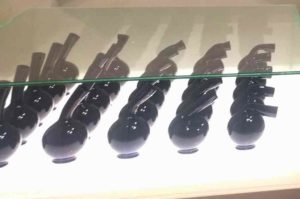 Chinese industrial designer Ran Xianfe developed the artwork Wave during his residency in Delft, consisted of vases which he made from a mold he brought from China, which he deformed in succession, like a wave in water. Successful graphic designer Yin Jiulong was used to designing with “clean hands” and assistants, and found that his residence in Delft confronted him with new working methods. He took existing Delft factory molds and created objects which he modified in unexpected ways, while preserving a traditional blue, white and gold color palate.

I found that the juxtaposition of ceramics from two historical eras on two continents, displayed here with contemporary artists’ interpretations, to make for a fascinating exhibit.