Het Schip is a social housing complex designed in 1919 by architect Michel de Klerk in the Amsterdam School style of architecture. The Museum Het Schip celebrates this masterpiece building, as well as documenting the Amsterdam School, the beautiful design of Michel de Klerk (architectural and other), and the history of the development of social housing in the Netherlands. 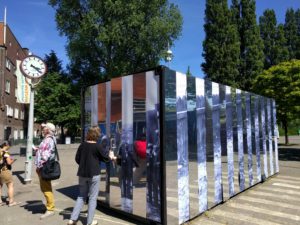 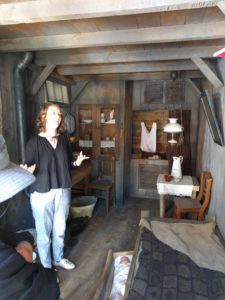 Recreated slum home. Note baby in the drawer. Parents slept in alcove in the back.

Our visit to the museum consisted of two parts — a guided tour, followed by an exhibit installed upstairs. The tour started by presenting the living situation of workers in Amsterdam at the end of the 19th century, demonstrating the need for a new type of housing. In a shipping container outside the museum, there is the recreation of the interior of a slum dwelling. We see how a large family would share one small room, with the toilet next to the cooking area, and all of the children in a small bed (with a drawer for the baby). Amsterdam was overcrowded and unsanitary, so in 1901, the government created new housing standards and set up guaranteed loans for associations to build worker housing. New apartments would have several rooms, separate bathrooms with flush toilets, and fresh air. The way the laws were written, it was possible for a socialist housing association to build a building such as Het Schip as worker housing, with sufficient budget for the beautiful architectural details typically only available in housing for the rich. 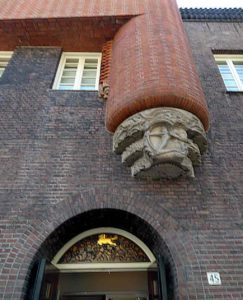 Detail of a side entrance to the building. 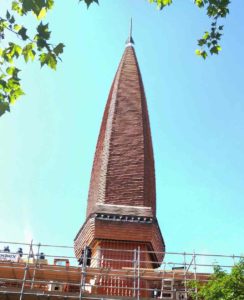 The exterior of this building is spectacular, one of the greatest examples of the Amsterdam School of Architecture. This brick expressionist style was a reaction to functionalism, where buildings were stripped of ornamenting. It’s hard to comprehend that this was built at the same time other architects in the Netherlands were developing the minimalist De Stijl architecture. Unfortunately, Het Schip, which still incorporates a primary school and housing as well as the museum, was being renovated at the time of my visit, so much of its beauty was hidden under scaffolding. 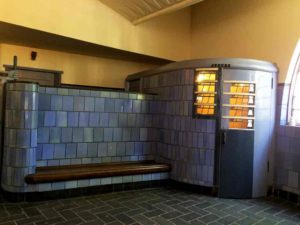 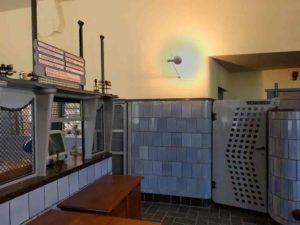 The tour took us into to the old post office in the corner of the building. We saw how de Klerk designed every detail. A post office would have been something new for the workers. It would been a place for them to cash their pay checks, rather than taking them to a bar, where often, most of their earnings would be spent on drinks. The phone booth (another new facility for workers) is an example of the humor in de Klerk’s design. He has decorated the window with stained glass “birds on a wire” as a gentle reminder that conversations in the phone booth could be heard by a telephone operator in the opposite corner of the post office. 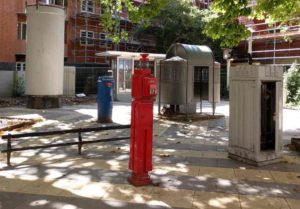 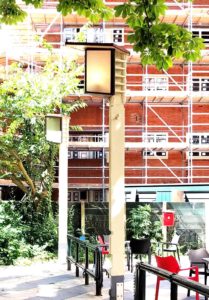 The tour finished in the courtyard, where the city has donated to the museum a collection of wonderful Amsterdam School street furniture. This included street lamps, a pissoir (urinal), a police box, a mail box and an electricity box. These ornate pieces are both similar and distinct from the Art Nouveau and Art Deco street furniture of other European cities. 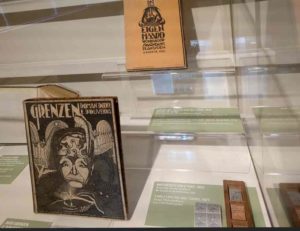 Graphic design by de Klerk — a book cover, stamps and a spec book for Het Schip 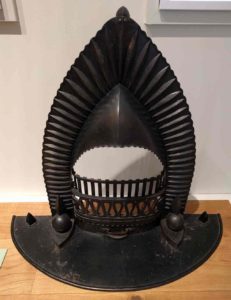 The museum’s permanent exhibit was very informative. I learned about de Klerk, how he was one of 25 children in a Jewish family, how his first job as a young teen at a famous architecture office was sharpening the pencils, about how he designed furniture during WWI, when there were no architecture commissions. The exhibit had examples of Amsterdam School design which went beyond architecture, and included interior design and decorative arts. In many ways it seemed related to the Arts and Crafts movement, but with some affordable pieces designed for mass production and other expensive pieces were hand made. The exhibit also contained graphic design from de Klerk and other Amsterdam School designers, including examples of the movement’s magazine Wendingen. Michel de Klerk designed of the type for house numbers and for signage in the post office, combining his interests in typography and in architecture.

This museum was a fascinating introduction to the the gorgeous design of the Amsterdam School, which I was unaware of before coming to this city.