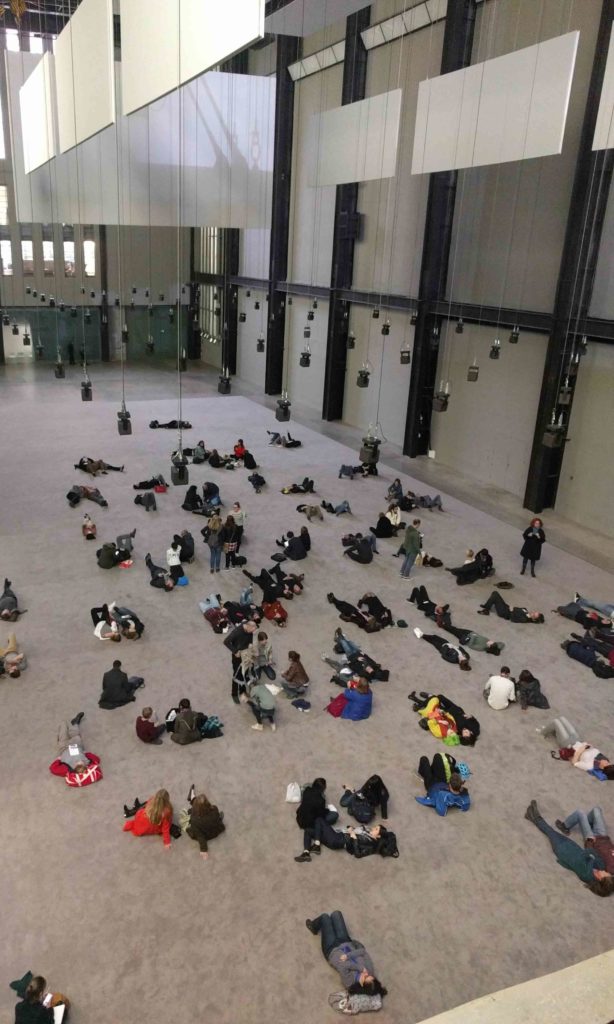 Philippe Parreno’s installation Anywhen, both minimal and complex, conceptual and atmospheric, is a great match for the Tate Modern’s Turbine Hall. This hall is a gigantic space that the Tate Modern has been challenging artists to fill. With the recent addition of the new wing to the museum, this hall is now between the two wings and has only grown in importance. This exhibit is a perfectly fit for this dramatic space.

When I first entered the hall, I found myself wondering if there was an exhibit on at all. The floors of the hall have been covered in gray carpets, encouraging visitors to sit or lie down and spend time experiencing the space and the piece. When I arrived, a grid of 72 speakers were hanging on very long cables from the ceiling, and they were playing what at first seemed like white noise, but I came to realize was a live sound feed from outside the museum. Occasionally snatches of music would be mixed in, from buskers that the outdoor mics happened to pick up. 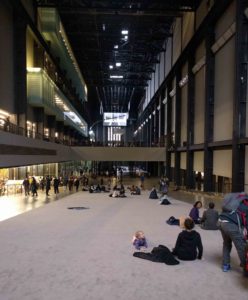 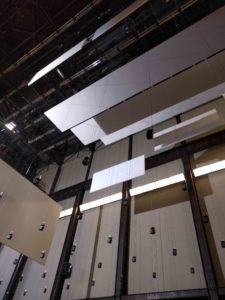 After a bit, the piece changed. The speakers rose up closer to the ceiling, as did some panels which I had hardly noticed that surrounded the speakers. A projector was lighting these screens, but when I was there it was just projecting white light. It caused the panels cast trapezoidal shadows on each other. These panels acted as both visual elements and as acoustic baffles — the changes to the height of the speakers and these panels changed the sound profile of the cavernous space. The soundtrack changed as well – now a recording played of a woman’s voice reading text. Light boxes along the ceiling would on occasion blink on and off in sequence. 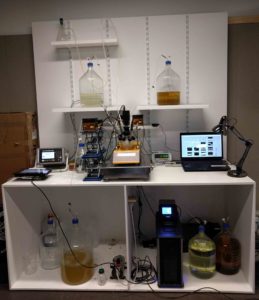 But what was really fascinating was what was controlling the piece — in the corner, at the far end of the hall, you could see a small room, the bioreactor, full of computers and big bottles and agitators. After reading an explanatory panel, I discovered that the piece is designed to change based on live weather data collected from the roof of the building. This data was used to affect the growth of bacteria (yeast) in the bottles, while in turn,  the output of the yeast (co2, and temperature fluctuations in the bottles) would be inputs to the program controlling the exhibit. 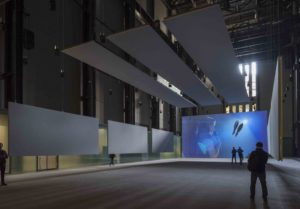 I visited the exhibit more than once, and the mood was different each time, based on these inputs as well as based on the people sitting in the exhibit — during one visit a large group of teen girls were sitting pecking furiously at their phones; during another, a maintenance staff member in a “high viz” vest was doing his best to explain the piece to a visitor. From photos I saw, there were other elements of the exhibit that were not triggered while I was there — videos of people on the large screen, and giant floating mylar fish. The idea that the piece was larger than could be experienced in even three visits only reinforced the fact that this piece was always changing, and that time itself was the subject of the piece (hence the title Anywhen).