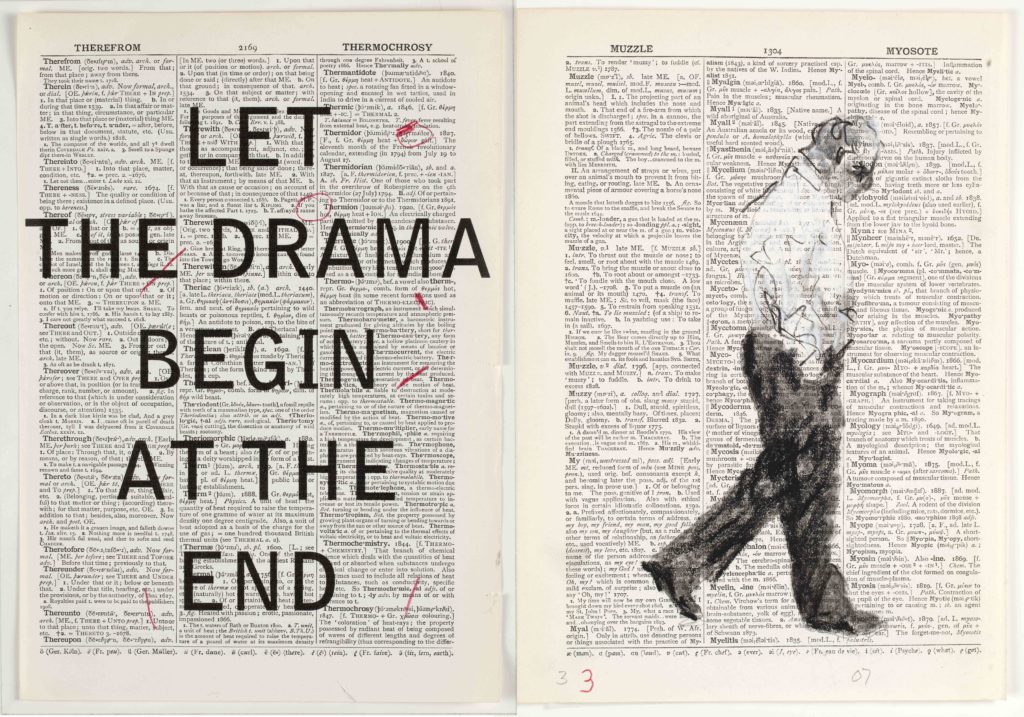 I was only slightly familar with William Kentridge’s work, but after seeing this show of exciting installations, I can’t wait to see more. 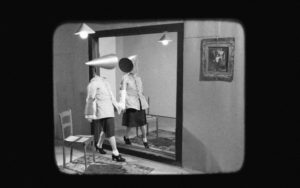 The exhibit consists for 6 large-scale multi-media environments. There is a sense of being “behind the scenes” — the hallways between the installations are full of shipping crates, and before you enter O Sentimental Machine, you see the installation from the back and some of the props used the film.

One of my favorites was Second-hand Reading. This installation was in a small room, with a screen with a video Kentridge made — a sort of fantastic flip book. He took apart a copy of the Oxford Shorter Dictionary, and drew on the pages in charcoal to create frame by frame animations, and added his own large text. Then, when he turned this into a video, he made it look like the pages were still in the open book. Sometimes one side or the other animates, sometimes both. The changing text on the dictionary pages break the illusion, showing when pages are changing, and when they are in short loops. 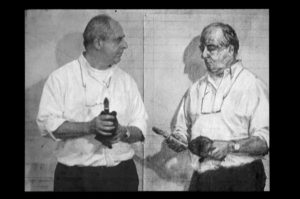 Another installation, 7 Fragment for Georges Melies, Day for Night and Journey to the Moon, was a room with 9 large black-and-white video projections. They each combine Kentridge’s technique of animating charcoal drawings with live action video, using special effects of early film director Georges Melies. Sometimes the video is recorded with the Kentridge moving backwards, and then is reversed, so that he appears to move forward, but props are doing impossible things such as ripped drawings becoming whole. Other times he animates physical objects using stop-action. In one film he quotes directly from Melies film Journey to the Moon, recreating scenes which he mixes into his own, non-linear video. While the films don’t tell a story like Melies did, they evoke very strong emotions, for me at least. 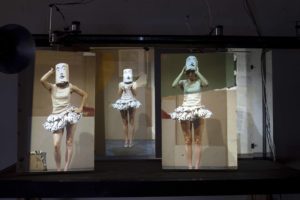 My favorite installation from this show was called Right into Her Arms. This piece is inspired by the opera Lulu that Kentridge had designed and directed. He takes a short clip from a workshop of the opera — a dancer in a paper costume performing in a mechanical way —  and combines it with animated ink drawings that he made, inspired by the opera. But the fascinating part is that this video is projected on sheets of wood and ripped colored cardboard, that occasionally will slide back and forth and rotate mechanically, seeming to dance more gracefully than the person in the film. At times the projection goes white, and we see just see the dance of the surfaces, moving in 2 then in 3 dimensions. Other times, the video plays and the contraption become still and our eyes adjust and ignore the fact that the video we are watching is projected on a ripped piece of green cardboard. Other times there is movement both in the contraption and in the video simultaneously.

It is fascinating to see an artist who is fascinated with technical wizardry, can be dadaist and lyrical at the same time.