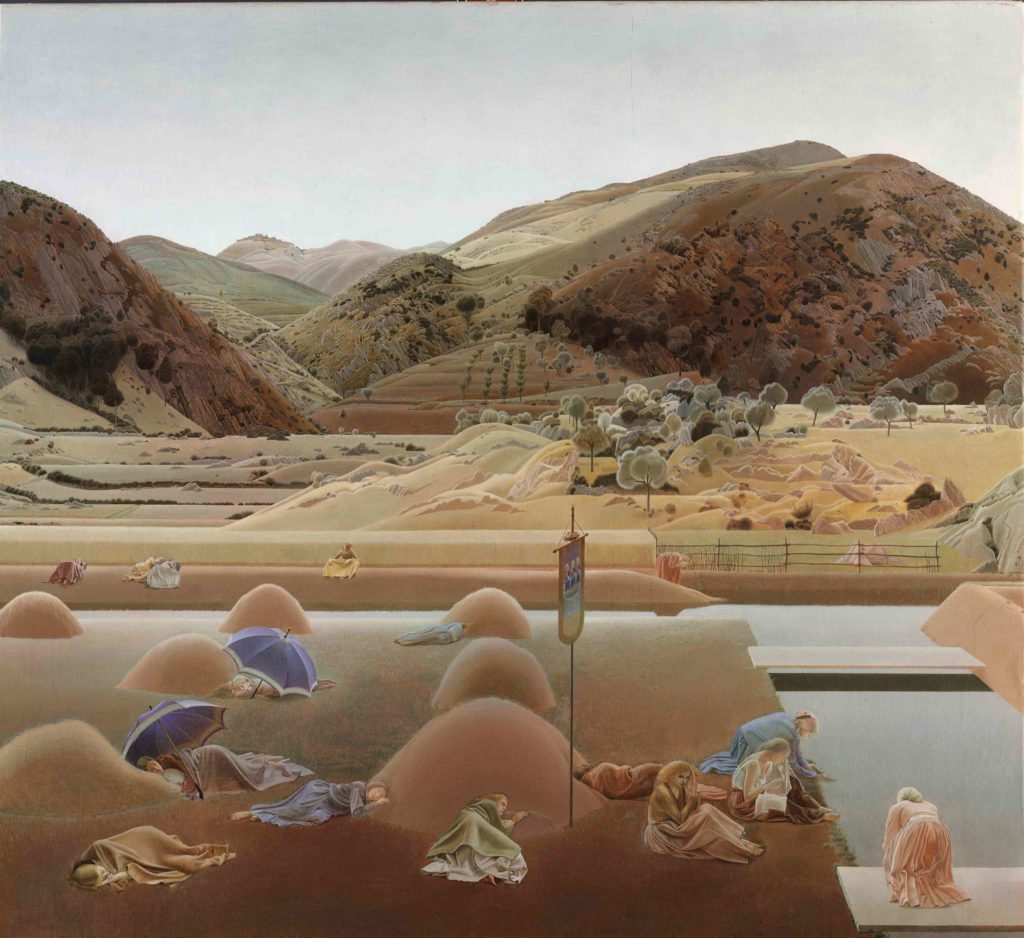 It is always exciting to discover a great artist who have been forgotten because they did not fit into the traditional art history narrative. While Winifred Knights was well known in her time, and one of her images, The Deluge, is popular,  this exhibit is the first retrospective of her work, almost 70 years after her death.

There are a few reasons she was not embraced by traditional 20th century art historians. She does not come from the avant-guard but rather remained closely associated with the art academies, that were shunned by modernists. She was a star student at Slade School and in 1920 she won the Prix de Rome, a scholarship to paint at the British School at Rome. Her style was far from the abstractions and cubism of some of her contemporaries, she painted religious scenes, with a nod to both quattrocento pastoral landscapes and to 15th century draftsmanship. Some of her paintings have the details and the celebration of light and color of the Pre-Raphaelites, while others had simplified forms of modernity.

Perhaps the final blow to her credentials in the “modern pantheon” was that she specialized in Decorative Arts — in this context this meant that her paintings were intended to be applied as a mural in public buildings. While the show starts out with her student work, it centers around a several large-scale major works, brought together from around the world with studies and drawings for each. 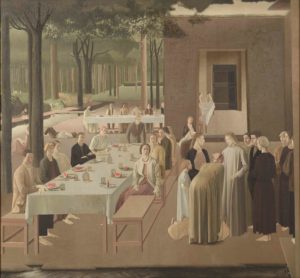 Winifred Knights, The Marriage at Cana, 1923, Oil on canvas, 184 x 200 cm, Collection of the Museum of New Zealand Te Papa Tongarewa. Gift of the British School at Rome, London, 1957. © The Estate of Winifred Knights

One thing that is fascinating about her compositions, is that while she painted scenes from biblical dramas, the paintings concentrate not on the events, but on how people around it were affected. In the Deluge she painted, not Noah’s Arc, but the terrified people who were about to drown. In The Marriage at Cana, the miracle of water being transformed into wine is hidden by the people gathered around.

Winifred Knight’s final great commission was a tryptic for Canterbury Cathedral. It depicts scenes from the life of St. Martin, but after it was completed, it was hung in the Ladies Chapel, rather than in Saint Martin’s Chapel where it was intended, which infuriated the artist. 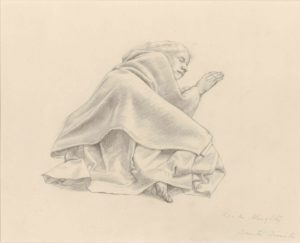 Winifred Knights, Study of a sleeping woman for The Santissima Trinita, c. 1924, Pencil on paper, 19.7 x 25.7 cm, © Trustees of the British Museum. © The Estate of Winifred Knights

After that, commissions dried up, in part because of her reputation for slowness (her commitment of detailed studies seemed to almost prevent her from finishing work). Also, I understand that the great depression meant there was less money for public works in Britain (unlike in the USA where government spending on the arts expaned with the WPA). She became committed to spending all of her time taking care of her son. During the blitz, her mental health declined, and she died of a brain tumor in 1947, at the age of 47. No obituaries appeared, she had already been “forgotten”.