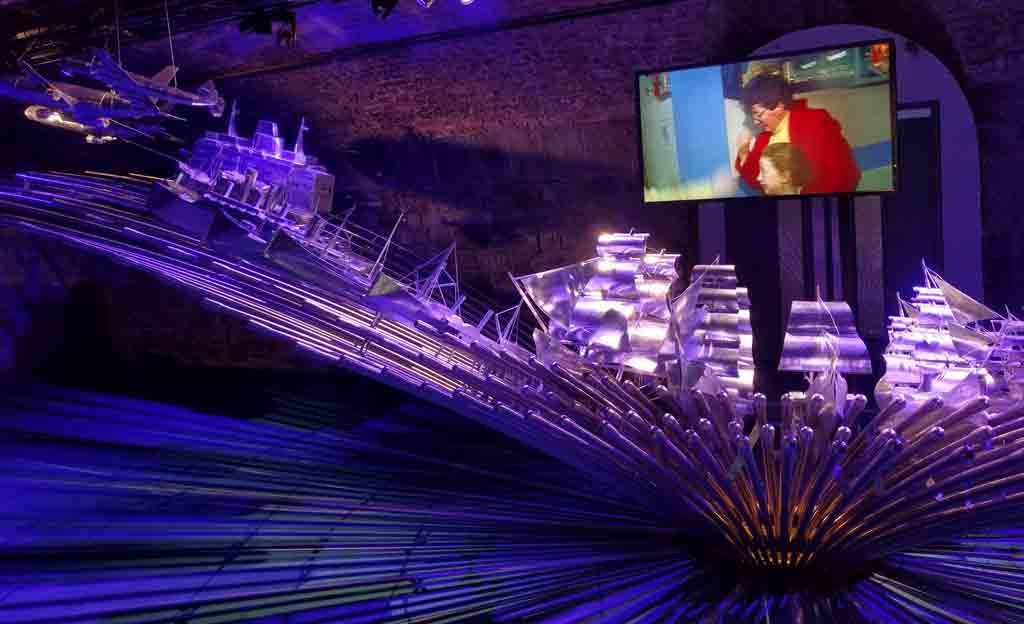 This wonderful new museum in Dublin, which opened in April 2016, tells the history of Irish emigration through the clever use of technology and interactivity. There are 20 galleries, each telling a different piece of the story. 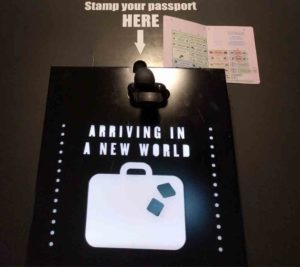 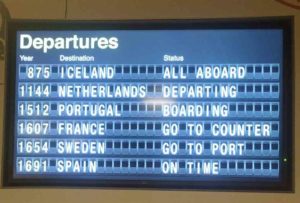 A departure board, showing the years and destinations of Irish imigrants

There are some clever bits to make your visit, in some small way, feel like the trip that emigrants made — there is a “departure board” at the beginning showing where people departed to over the centuries, and a “passport” which visitors stamp in each gallery they visit. But most of the story is about the adversity that forced the emigrants to leave, and how they brought their culture and values with them to their new homes across the globe. 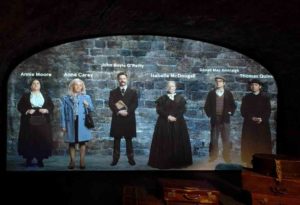 Emigrants, as portrayed by actors.

One area had videos of actors from different eras acting out the words from the journals and letters of actual emigrants from different eras. They explain why they left and what their lives were like in their adopted countries. There is a Finian rebel who is forced to go to Australia, a woman who’s family went to seek their forune in the 1890’s in New York’s Lower East Side, a young woman who, during the potato famine, is sent to Australia as part of a scheme to relieve overcrowding in the Irish workhouses, a man who left for England when he could not get work in the 1950’s, and a women who left with her husband to Canada from Belfast, to escape the violence of the Troubles in the 1970s. 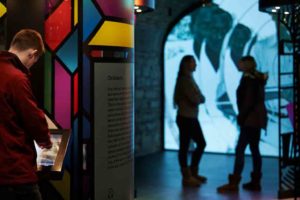 Another gallery documented individuals who left Ireland because they wanted to offer something to people in other areas of the world. This includes missionaries who wanted to share their faith, as well as educators and social justice crusaders.

Other exhibits explained the history of Ireland under English rule, and the oppression that lead to emigration across the centuries. These are sad stories. Farmers who lost their lands under Cromwell in the mid 17th century were forced into indentured servitude in Virginia and Bermuda. The “wild geese” were Irish aristocrats who lost at the Battle of Boyne in 1690 and then went to Europe and fought with the French army. Catholic priests were sent to Australia as prisoners after the uprising of 1798. Victims of the potato famine who starved as the protestant land-owners exported milk and meat to England, left for the United States and Australia, though many died en-route in the “coffin ships”. 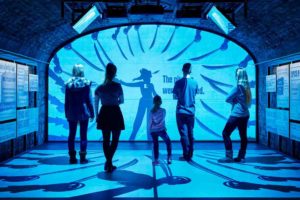 One section was called Achieving Infamy, was about notorious Irish emigrants. This included Billy the Kid, Irish pirate Grace O’Malley, the bandit Ned Kelly in Australia, and Cathrine O’Leary who was (falsely) accused of starting the Great Chicago Fire. 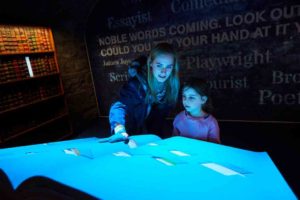 An exhibit on Irish emigrant writers.
Photo courtesy of EPIC

Another big theme of the museum was the cultural contribution of Irish emigrants across the world. One set of exhibits told of the Irish Dancing and Gaelic sports that emigrants brought with them. Other sections featured artist who either were either emigrants or were of Irish descent. George M. Cohan, James Cagney, Gene Kelly, and Colin Quinn were all Irish-Americans in showbiz. Edward Quinn was a Irish photographer in 1950’s Cote D’Azur. Painter Francis Bacon was born in Ireland but lived in England. The Pogues played “Irish Punk” in London. Orla Kiely is an Irish fashion designer based in London. Writers James Joyce and Samuel Beckett both lived and wrote in France.

I loved this museum. With almost no historical artifacts to display, it instead tells its story with technology. Each gallery of the museum uses different technology and interactivity, from videos and kiosks, to a game visitors can play in Achieving Infamy by standing in front of the character of their choice, to an interactive book about Irish expat writers, to a table-top “pub quiz” about Irish pubs (yes, there are more Irish pubs in the USA than in Ireland).