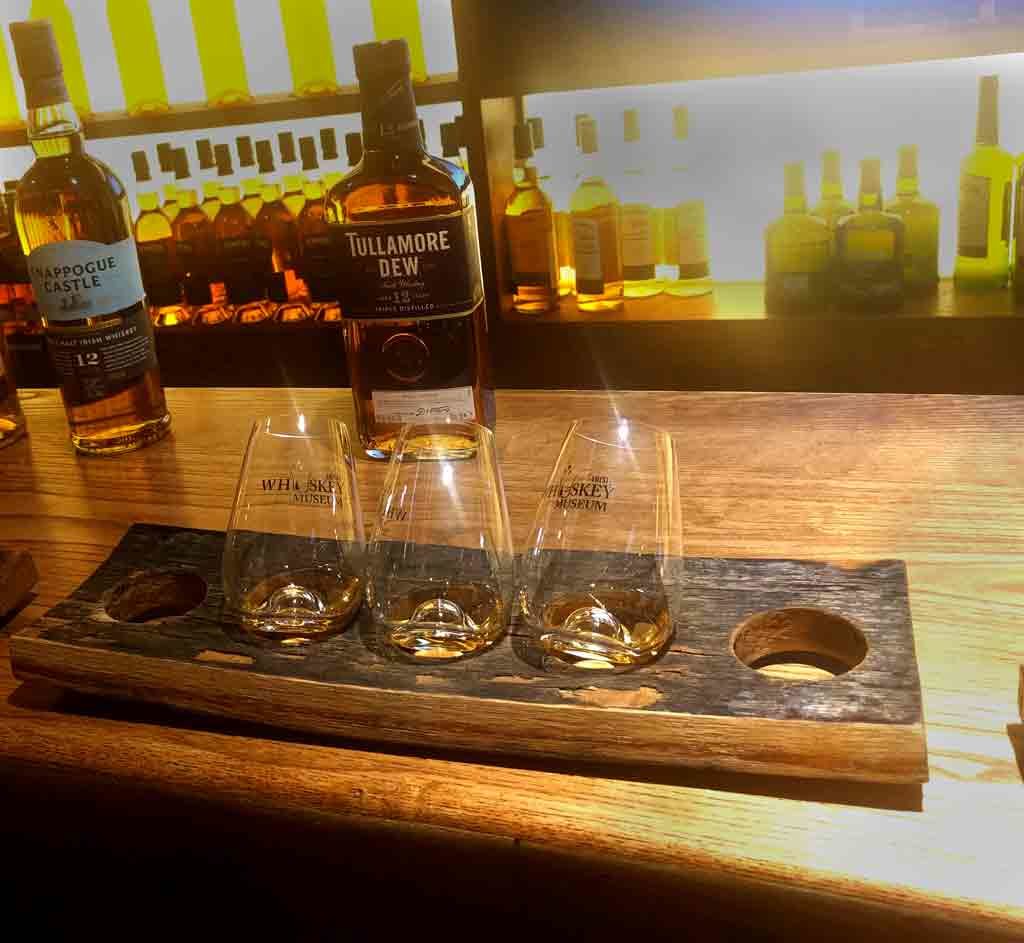 I decided to visit this museum for my birthday this year, even though I knew it was going to be a “tourist trap”. My wife and I like bourbon and not Scotch, and since we are in Dublin for 3 months I wanted to learn more about Irish Whiskey. I felt this would give me a broader view than visiting one distillery — plus I can’t pass up a museum. Visits are by guided tour only — groups are taken through several set pieces to learn about Irish whiskey and its history. 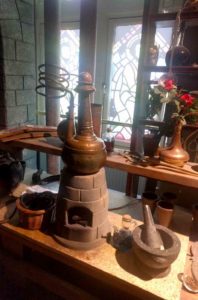 Antique still with a mortar and pestle 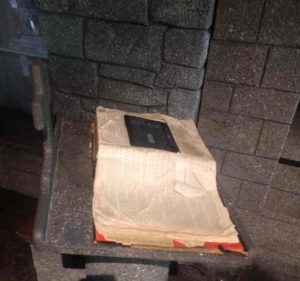 Controls for the interactivity were “hidden” in the sets, such as this touchscreen embedded in a bible

The first room was set up to display artifacts of Irish distilling. Here the guide gave us an introduction. He explained how the word Whiskey comes from the Gaelic word “uisce betha” or water of life, and he related how this term existed in the languages of many of the visitors on the tour (“akvavit”, “eau de vit”) and he engaged the group by asking what was distilled to make their local spirits (answers included wine, fruit juices, corn and malted wheat) and what flavorings were added. There were supposed to be an electronic interactive elements to the tour, but unfortunately most of the technology was not working on the day of our visit. 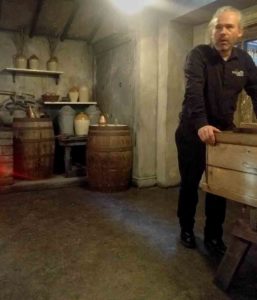 The second room was set up like an Irish wake, with a casket laid out. Here the guide explained about poitín (or potcheen), the Irish equivalent to moonshine, which was made illegally to aviod taxes, and which is not aged like whiskey. He also told us about the Irish tradition of the seanchaí or storyteller, and how wakes would traditionally be 3 days of drinking and storytelling. Our tour guide was taking the role of seanchaí, telling us stories of the old day of Whiskey. 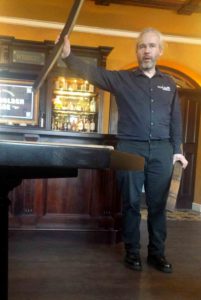 The third room was set up as a victorian pub, and here our guide explained the evolution of whiskey making during the 19th century. He explained how Irish whiskey is now aged in sherry or bourbon casks. Apparently there is a US law that requires bourbon to be aged in new casks made of charred oak, creating a large market for these once they are used. We also learned about the efficient continuous still, invented in Ireland by Sir Anthony Perrier, and improved by Irishman Aeneas Coffey. This still created large quantities of “smooth” pure alcohol, which could be blended to the desired taste. While this invention was embraced by Scottish distillers (as well as vodka, gin and rum makers), the Irish distillers stuck to their traditional pot stills. This prevented them from taking advantage of the cost savings, and contributed to the decline of Irish whiskey. 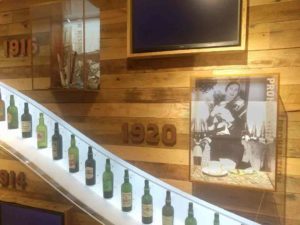 Timeline of Irish whiskey production. Note the decline corresponding to the years of Irish independence and US prohibition.

The walls of the fourth room were a giant timeline made out of historical Irish whiskey bottles, showing the ups and downs of Irish whiskey. Through the 19th century, Irish whiskey was exported throughout the British empire, and Irish distilling was at it’s peak, but all that changed in the early 20th Century. First off, the refusal to accept the coffey continuous still meant that Irish Whiskey was less smooth and more expensive to produce than blended Scotch whisky. Secondly, after the Irish War of Independence, Ireland and Britain were in a trade war, prohibiting Irish exports to the UK and to Commonwealth countries. Finally prohibition in the USA eliminated another market. By the time some of these issues were resolved, drinkers around the world had moved on to prefer Scotch whisky and Irish whiskey was in decline. In 1970, after closings and consolidation, there were only two Irish whiskey distilleries left both owned by the same company. One is in county Cork in the Republic of Ireland produced Jameson, Posers and Paddy, while Bushmills is in Norther Ireland. Production was down to 400,000 gallons per year, from a peak of 12 million gallons in 1900. However, since the 1980s, in conjunction with the growth of the Irish economy (the Celtic Tiger), this has turned around. The Irish have more disposable income for domestic consumption. Ireland’s membership in the European Common Market now allows Irish Whiskey to be on equal footing with Scotch Whisky around the world in terms of tariffs. Tastes have evolved and blended whiskey is less popular. Pop stars such as Lady Gaga pride themselves in drinking Jameson. There are now 16 distilleries running in Ireland, 14 more planned. Countless new brands are being sold, some independent but borrowing distilling time from the large distillers.

The last part of the tour was an Irish whiskey tasting. This was where we truly interacted with the spirits. We were each given 4 different whiskeys to taste, and the bartender explained how to best taste whiskey — each tasting is swirled in a tulip shaped glass, and is sniffed and tasted first straight, then with a few drops of water. Each of the whiskeys had its fans, but I found that I liked the smooth taste of Powers over some of the more expensive labels.

While this was very different style of museum than most that I visit, it was a fun outing.