Visiting a massive museum full of old-master paintings like the Rijksmuseum in Amsterdam, it is a pleasant surprise to come across a gallery with a small gem of an exhibit like this one. Maria Sibylla Merian was a 17th century naturalist, entomologist and scientific illustrator, who is known for her books with pictures of flowers and insects. She was unusual in her time, as a women artist and as a scientist — she was forbidden from entering the painters guild, and therefore was not allowed to paint with oils. To put this in perspective, her first works were published during Rembrandt’s life time, and about 100 years before John James Audubon in the United States. Also her groundbreaking observations of the metamorphosis of insects was popular in her time but was not taken seriously by scientists because it was written in German and not in Latin. She is known for her travel to Surinam, and she reminded me of Marianne North, another woman who traveled to study and paint plants, who’s work I saw exhibited in Kew Gardens.

To mark the 300th anniversary of Merian’s death in 1717, the Rijksmuseum is presenting this exhibit of photomontages by Ella Reitsma.Snoep, which combine Merian’s botanical drawing with photos from the contemporary artist’s garden. Reitsma.Snoep, under her given name Ella Reitsma, is an art historian who specializes in the work of Maria Sibylla Merian and her daughters. Reitsma.Snoep identified the plants in Merian’s publications and grew them herself in order to create this work. 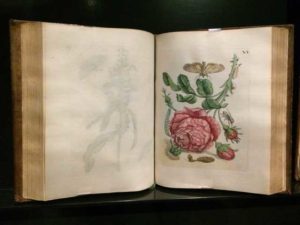 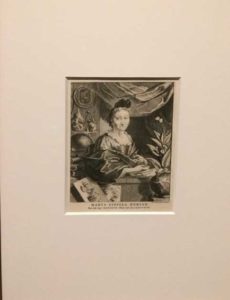 The exhibit includes a volume of Merian’s book “The Caterpillars’ Marvelous Transformation and Strange Floral Food” as well as her portrait, but the bulk of the show is 13 photomontages by Ella Reitsma.Snoep. 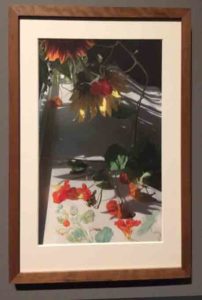 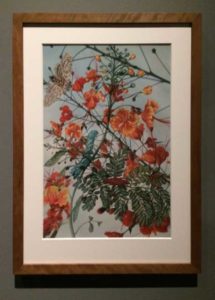 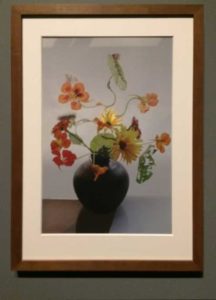 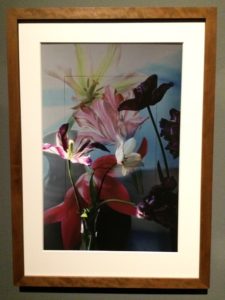 In some of my favorite works, Snoep combines the printed and photographed flowers into one naturalistic composition, as if the drawn and the photographed flowers exist in in the same vase or plant. This combination of different pictorial spaces reminded me of Escher drawings we had recently seen in the Escher museum on The Hague.